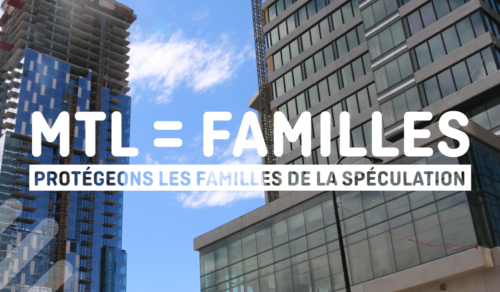 Montreal, Wednesday 3 Mai 2017 – Projet Montréal wants the City of Montreal to obtain the means to fight against a possible overheating of the real estate market, as has been observed in Vancouver and Toronto. The Official Opposition will ask the Government of Quebec to modify the Act Respecting Duties on Transfers of Immovables, better known as the “welcome tax”, so that the City of Montreal could impose a tax on foreign buyers of residential real estate properties.

“At the moment, the Montreal real estate market is still under control, but we need to obtain the means to prevent the problem, instead of trying to control it once it’s too late. There is clearly a domino effect that has inflamed the market from Vancouver to Toronto. It is our duty to prepare ourselves, so that we don’t end up with severe access to housing problems caused by a sharp rise in prices, supported by foreign speculation”, said Valérie Plante, leader of the Official Opposition.

Between January and October 2016, the number of foreign buyers of condominiums in Montreal has increased by 62%. In downtown Montreal, the rate of foreign owners has already reached 5%, which is equal to that of downtown Vancouver. “Experts have observed a shift in foreign buyers from Vancouver to Toronto following the implementation of Vancouver’s 15% tax. The same phenomenon may occur once Toronto implements its own tax on foreign buyers. The risk is exacerbated by the low exchange rate on the Canadian dollar. We have to prepare to tackle the situation and ensure Montreal families don’t lose the capacity to acquire property because of foreign speculation”, added François W. Croteau, mayor of Rosemont – La Petite-Patrie.

Already, in 2011, one out of five Montrealers were spending more than 50% of their income on housing. “We can be proactive here, and ensure access to safe and healthy housing at a reasonable price to all Montrealers. Let us not repeat the errors made by Vancouver and Toronto, who waited too long before taking action. Let’s do it now”, concluded Valérie Plante.

During May 15th’s city council session, the Official Opposition will table a motion asking for the power to implement a tax on foreign speculation on real estate. To read the details (in French), please follow this link.