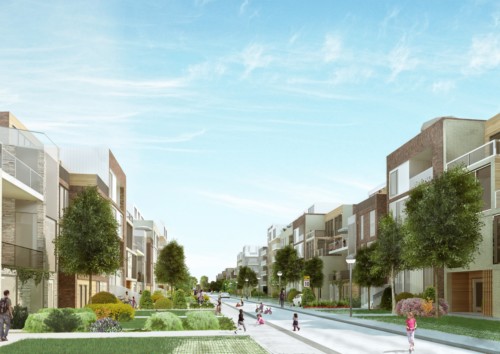 Valerie Plante, Projet Montreal leader and Montreal mayoral candidate, plans to turn the sector of the Hippodrome into a prime example of a family oriented neighborhood in Montreal. This new neighborhood will accommodate 16,000 new residents, will offer 60% family housing and will include 3 schools, 3 parks, 2 daycare centers, a library, and local stores. Located close to the metro, this new neighborhood has the potential to become a model for Montreal. In fact, the planning of the Hippodrome site will make it possible to establish the criteria for a new certification of “Family oriented neighborhood”, which will require developers to offer family housing, schools, daycare centers, parks, and local stores on the same site in order to obtain this certification.

“With its proximity to the metro and several major roads, the Hippodrome offers an exceptional location for the development of a new neighborhood that could welcome 16,000 residents. Projet Montreal will seize this unique opportunity to develop a neighborhood designed with the needs of Montreal families in mind. Of the neighborhood that will be developed on the site of the Hippodrome, we want to create a model that will attract and keep more families in the city.” - Valerie Plante, leader of Projet Montreal and aspiring mayor of Montreal

“This new family oriented neighborhood which will be developed on the Hippodrome site will offer families what they can find and what they appreciate about the central boroughs: larger housing units, schools, daycare centres. Parks, local stores, access to public transit. Unfortunately, these neighborhoods have become unaffordable for so many over time. Projet Montreal will not make the same mistakes as the previous administration which, between 2000 and 2016, let 30,000 children under the age of 15 and their families cross the bridge.“ - Magda Popeanu, city councilor for the district Côte-des-Neiges