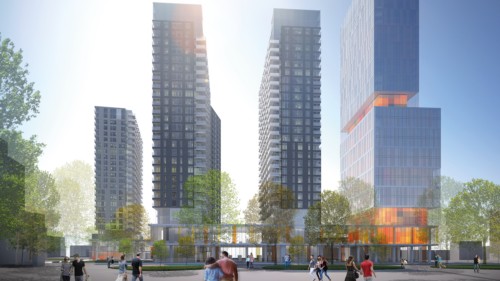 Montreal, Monday 20 March 2017 – The redevelopment of the former Montreal Children’s Hospital site must be conceived around the needs of Montreal families and the site’s immediate surroundings, said Valérie Plante, leader of the Official Opposition. Projet Montréal has concerns about the integration of the project in the neighbourhood and the lack of measures needed to attract families, such as large housing units, quality parks, and the presence of a school. These concerns will be voiced this evening at the public consultation conducted by the Office de consultation publique de Montréal.

The leader of Projet Montréal is asking the planners of the Children’s redevelopment project to include the required infrastructure to keep families in Montreal, namely, large dwellings, a big park with recreation facilities, and an elementary school.

In its current state, the project does not provide for units bigger than 65 square meters (700 square feet). “It is totally unrealistic to believe that a family wishing to settle in Montreal will consider a 700 square-foot apartment or condominium. The Childrens’ redevelopment project must include large units with at least 1000 square feet. The city’s Downtown Strategy, put forward by the Coderre administration, specifically states that large dwellings must be prioritized in the downtown area in order to attract families”, added Valérie Plante.

Schools in the area are already overpopulated. The Official Opposition wishes to add its voice to that of the CSDM to demand a new school in the Children’s redevelopment project. “If we want to attract families, we need to ensure they will have access to essential services. It is therefore essential to immediately plan for the construction of a school so that the first families to move into the neighbourhood can send their children there as soon as they arrive”.

The same reasoning applies for parks and playgrounds. Residents have been asking for years to have a big park and high quality recreation facilities, to no avail. “During the debate surrounding the Domaine des Franciscains, the mayor pledged that a park would be added on the Children’s site. We were extremely disappointed to find out that the park in question would be so small and overshadowed by huge towers!” expressed Ms. Plante.

The leader of Projet Montréal also regrets that the project completely ignores the historic skyline and heritage of the neighbourhood. With its new towers between 20 and 32 stories high, the project will stick out like a sore thumb in an area which is mostly built three stories high, albeit with a few towers. The destruction of the art deco style “D” wing is particularly regrettable. “The developer has not convinced us that this portion of the Children’s needed to be torn down. On the contrary, we believe that this part of the former hospital has a great potential to be requalified. We can’t just erase a slice of Montreal’s history », concluded Valérie Plante.